I Guess I Live in a Wildlife Sanctuary! 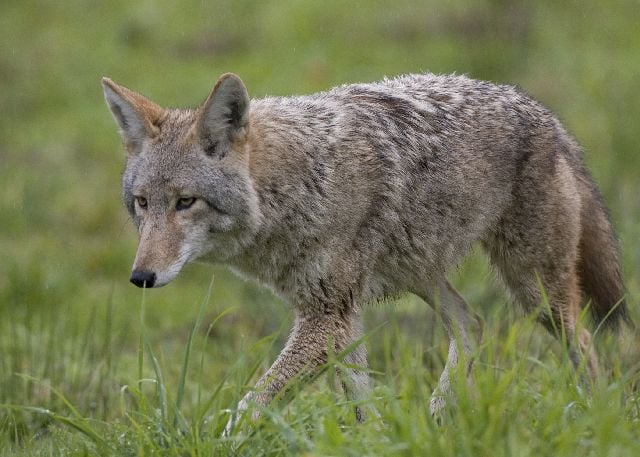 Picture courtesy of WFMJ. The wild west? No. Canfield, Ohio.

If you remember, last fall I wrote an op-ed about a bear that had infiltrated my place of residence. I also included the obsession with feeding birds in my neighborhood and the wildlife this bird food attracts. Allow me to recap. I have the typical wildlife like everyone else: bunnies, hawks, chipmunks, and mice. I also am blessed or cursed with the not-so-typical wildlife: deer, wild turkeys, racoons, bears, snakes, and I cannot believe I’m saying this: COYOTES! Yes; I did just say that.

Now before I tell you my sad story, I’ll update you on the animals in my area. I had little baby deer in my backyard this summer. I actually enjoy seeing them because they are so cute. The racoons crawl out of the storm sewer and I see the families headed towards the woods in my backyard. Yes, the babies are cute too, but I want no part of them and I will gladly give up cuteness to get them out of my sight. The bear apparently made a comeback in June. He destroyed two of my close neighbors’ bird feeders. And of course, my neighbors just went and bought another one after my association told everyone to take their feeders down. DOESN’T ANYONE FOLLOW DIRECTIONS ANYMORE? But for now, he is MIA, and for that, I’m relieved.

Now, onward to my very sad story. Last week, I saw my neighbor John in my backyard screaming for his little dog, Bella. I just figured she took off and came around to my front door because she has been known to do that. I would often get her and carry her back home. I went to my door this time, and Bella was not there. I just figured she ran over to Frank Dravecky’s house to meet up with her little buddy Angel, who is the cutest and sweetest maltese ever. I didn’t see John again, so I went back to watching tv and I thought all was well. It wasn’t.
The next day, I stopped to get my mail and was talking to a resident of my condo neighborhood, and he asked if I had heard what happened to John and Elenor’s dog. My heart had sunk because I recalled him looking for her the previous evening. I had asked, “Did she get hit by a car?” He said, “No, a coyote got her!” I was in shock. COYOTE! WHHHAAAAATTTTT???? He even said, “Where the heck do we live that we have all these animal problems?” We live in a city, and that I cannot understand.
I immediately went over John and Elenor’s. They were sitting on the porch just staring at her leash and water dish. I gave my condolences and since I just couldn’t wrap my brain around a coyote being in our yard, I asked them were they sure that is what happened. Elenor said “Missy, I saw him take her. I turned to go get my coffee and he came so swiftly and carried her into the woods. I saw his bushy tail. That’s how I knew.” After they realized what had happened, they called their daughter and she went into the woods, and found Bella. She was very bloody and mangled (sorry for the gory description) but at least they could give her a proper burial. I didn’t know what to do for them. I would see John, who is 92, walking her every morning, and I could tell Bella was the light of their life.

When I got home, I lied on the couch and took out my phone and decided to do some research on these coyotes. All I could think of was the Wild Coyote from the cartoon Bugs Bunny; only this wasn’t funny nor was it entertaining. Having this sly creature around really bothers me. According to the Ohio Department of Natural Resources, coyotes are NOT native to Ohio, however, they are spotted in all 88 counties. They are very intelligent and are known to be “Deceiving manipulators.” I’m getting anxious already. They are omnivorous–VOCABULARY ALERT! This means they eat both plants and animals. They will prey upon mice, chipmunks, and squirrels, but they will attack chickens, sheep, and in my neighborhood–little doggies.

If you refer to this map, it’s not very comforting. I live in Mahoning county, and coyotes are rare for my county. But the more I talk to people, the more I’m hearing stories of seeing and hearing them. According to Wildlife Research Technician Laurie Brown from the Ohio Department of Natural Resources, “I always ask people when they call us, ‘Was there something there that could have attracted the coyote? Was there a food source outside that could have attracted them?’ And that can be anything from a bird feeder to trash to pet food that’s been left out.” Here we go again–the bird feeders! The more I read though, the more I became worried because coyotes are more nocturnal and they avoid humans. Well, Bella was taken about six o’clock and Elenor was outside on the porch. They say if you encounter a coyote, you should scream, yell, wave your arms–but don’t run! YA RIGHT! That would be the first thing I do.
I went over to Frank Dravecky’s the other day to check on him and his little dog, Angel. I told him I couldn’t believe it about Bella. Frank always brings me back to reality when I talk to him. He said, “Melissa, that’s life. What do you expect, we are taking away all of these animals’ habitats.” I couldn’t agree more. Two blocks up from me, they cleared a huge wooded area to build a big condo, apartment, and assisted living complex. It’s supposed to be “off the chart” when it comes to modern and hassle-free living. But the hassle just begins when these wild animals have no place to go. I feel for them but at the same time, I feel scared for myself and my neighbors. After the bear sighting, now a coyote, I don’t take walks anymore. I’ll just walk on the treadmill before tennis to get some exercise. That upsets me because I used to love to walk in my neighborhood and get fresh air. I’m even afraid to sit on my porch in the evening. So, here we go again with letting unwanted wildlife dictate my love of the outdoors.
I saw John walking outside the other day; he obviously isn’t afraid. But I felt so bad because he was alone. I was so used to seeing Bella walking by his side. I stopped my car to see if he was okay. He told me he can’t stop walking since that was his only exercise, but he said, “I sure do miss her. She was such a good girl, Missy.” Yes, she was John; yes she was.