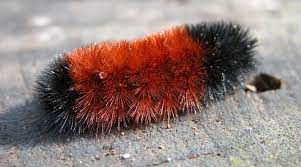 Can you even imagine a little insect that can forecast the winter ahead of us? Well this little creature has a rusty patch of fur that can expand .If the patch of fur is wide it will be a mild winter, if it’s small, it will be a severe winter, and if it is full, it will be a calm winter. We will be having a mild winter shown by the caterpillar in Mrs. Ciminero’s video. Typically, the bands at the ends of the caterpillar are black and the one in the middle is brown or orange. The + Farmer’s Almanac states, “Many people see entirely black caterpillars and think there will be a very severe winter, but the caterpillars are a different species.” Woolly bear caterpillars get their name from their short stiff bristles. The name doesn’t fit because they aren’t woolly AT ALL. From far away they might look woolly, the only way you can see the bristles clearly is with a magnifying glass. You probably would think caterpillars walk slow but they actually walk really fast.

The woolly bear caterpillars have two generations that come out at two different times. The first generation comes out in June and July, and the second generation comes out in September. The second generation is called the “weather prophets.” Hence why we are so interested in these little buggers. The caterpillars are most active during the day because they fill up on their food at night. They eat vegetation such as violets, lambs quarters, and clover. Over many years they have gained different names, some are woolly worm, fuzzy bear, black-ended bear, and banded woolly bear. After a while they make a chrysalis and rest for one to two weeks. After they rest, these caterpillars turn into an Isabella Tiger moth, they are just a regular moth that will fly around your lights outside.

If you can’t get enough of all the Hoopla surrounding this little creature there is a Woolly Bear Festival every year in Cleveland, Ohio around October 1st. It is touted as the largest one-day festival in Ohio, with attendance over 100,000 people. The festival began in 1973. It features a woolly bear costume contest where children, even pets, are dressed up as the woolly bear caterpillar. There is also a Woolly Bear Parade that happens every year on October 10th; if you love this caterpillar go and check it out some time!

I am hoping for a calm winter with a nice amount of snowfall but the caterpillar says we won’t be having that! If you see a Woolly Bear Caterpillar be sure to look at it’s rusted patch of fur in the future to see what winter we will be having! Who knows? Winter could change in a couple days and become more severe or calmer.